Warlord Games
SKU
WGVS-742411050
Yamato (大和, "Great Harmony") and her sister ship, Musashi, were constructed shortly before the outbreak of World War II. They were the heaviest and most powerfully armed battleships... Read More
£12.50
In stock
Notify me when the price drops
Skip to the end of the images gallery
Skip to the beginning of the images gallery 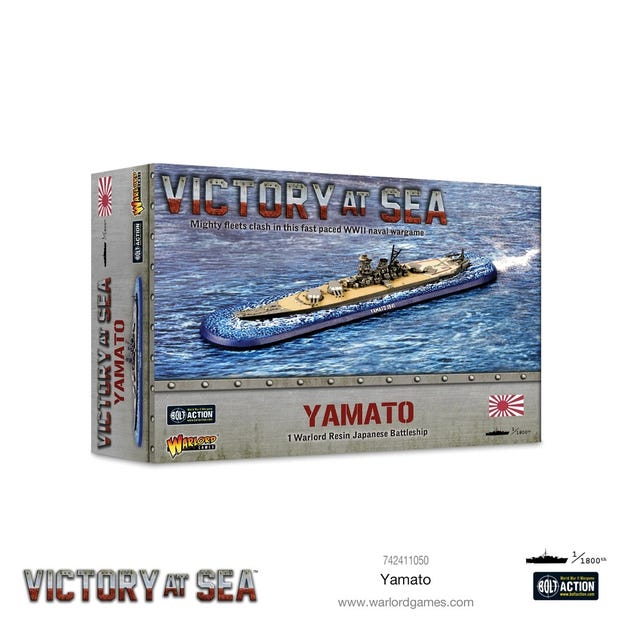 Yamato (大和, "Great Harmony") and her sister ship, Musashi, were constructed shortly before the outbreak of World War II. They were the heaviest and most powerfully armed battleships ever constructed; armed with nine 18.1” Type 94 main guns – the largest guns ever mounted on a warship.

The battleship’s design was an answer to the numerically dominant US Navy – Imperial Japan’s primary threat in the Pacific. Though laid down in 1937 the battleship was not actually commissioned until late 1941, a week after a fated attack on Pearl Harbour. She served as the flagship of the Combined Fleet. It was from her bridge that Admiral Isoroku Yamamoto directed the fleet at Midway in June 1942, though this proved a disastrous defeat for the Japanese. She was thereafter replaced by the Musashi as flagship and spent the larger part of 1943 and 44 moving between ports in a responsive role.

October 1944 was the only occasion on which Yamato fired her main guns in anger, at the Battle of Leyte Gulf. Yamato had been tasked with repelling American forces invading the Philippines. Though success lay within Japanese grasp, such was the ferocity of a counterattack of a light escort carrier group of the U.S. Navy’s Task Force 77 that the Japanese enacted a retreat, falsely believing they faced a much larger carrier force.

By early 1945, Naval superiority in the Pacific belonged firmly to the US Navy. In an effort to delay the Allies’ advance, Yamato was dispatched to Okinawa in April 1945, with no expectation to ever return. Her orders were to beach herself and fight until destroyed. This was not allowed to occur when, on 7 April 1945 when she was sunk by US carrier-based bombers and torpedo bombers, with the loss of the majority of her complement.