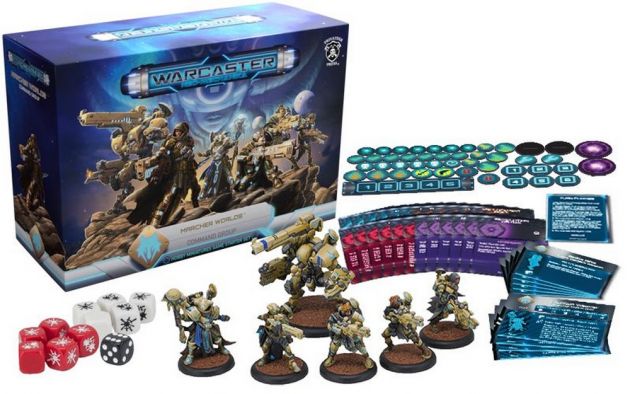 Warcaster: Neo-Mechanika is a high-speed hobby miniatures game for two players who each take on the role of a powerful Warcaster in command of a formidable battle force!

Players assemble and customize a force of 20-30 models and fight a scenario-driven battle using dice and cards to control their mighty units and to cast epic cyphers. The game is played using an alternating-activation turn sequence with a round tracker that governs scoring opportunities and the duration of ongoing effects. Players take turns activating units one at a time and using their rack of cyphers, reality-warping spells that can be used to enhance their troops and warjacks or to devastate their opponent's forces.

While Warcasters are not physically present on the battlefield, their presence is always felt. A Warcaster coordinates and supports their forces from a sophisticated command and control centre called a rack, located aboard a massive battle carrier that transports the Warcaster's troops and warjacks. In the game, the rack is represented by a deck of cards - the spell-like Cyphers - that players customize prior to the game based on the powers and abilities they wish to wield as a Warcaster!

The Marcher Worlds is a Coalition of Free States, unified by their resistance to outside governance. Often settled on harsher or more hostile planets in the Hyperuranion, those who inhabit the Marcher Worlds are resourceful, adaptable, and stalwart, or they would not be able to survive in the conditions they do, much less repel the advances of the Alliance as well as many other threats to civilization. Their militias and militaries make due with what they have and employ unconventional strategies and tactics to overcome their adversaries. Coalition Warcasters range from devoted patriots fighting for the freedom of their people to renowned mercenaries ready to sell their talents to the highest bidder.

The Marcher Worlds Command Group Starter Set contains everything one player needs to begin battling across the Thousand Worlds of Warcaster: Neo-Mechanika.