Firelock Games
Product SKU
FGD_0044
This fast-paced, highly tactical game is set in the 17th Century Caribbean during the age of piracy, it can be played on your average kitchen table in about 2 hours and is sure... Read More
£91.67
In stock
Notify me when the price drops
Skip to the end of the images gallery
Skip to the beginning of the images gallery 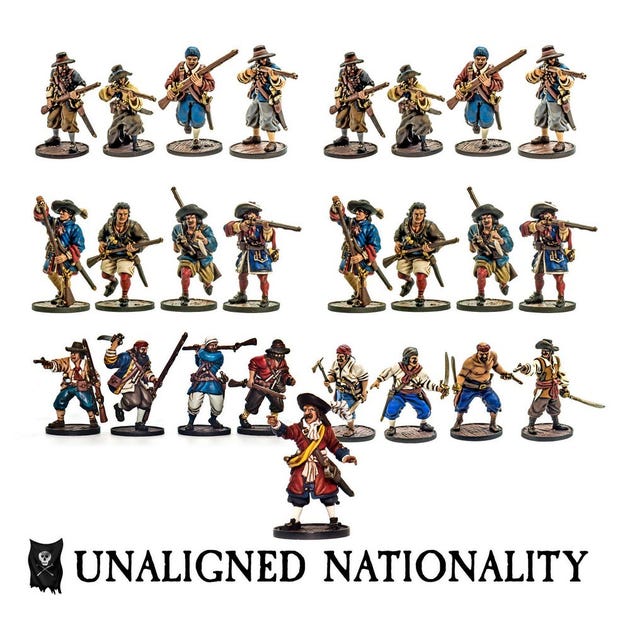 This fast-paced, highly tactical game is set in the 17th Century Caribbean during the age of piracy, it can be played on your average kitchen table in about 2 hours and is sure to appeal to both casual and competitive players. Blood & Plunder was also produced with consultation from world-renowned historian and author Bennerson Little to ensure that all models, scenarios and strategies accurately reflect the period.

This bundle includes 25 models and allows you to build a 100 point force of either:

Brethren of the Coast: These adventurers are of all nations, races, and ethnicities, and their sole purpose is to harry Spain-to plunder the Spanish Main! They are English buccaneers, French flibustiers, Dutch freebooters, Spanish deserters, Portuguese seamen, and freed slaves and other men of colour, all banded together for common purpose. If they are English and are forbidden to plunder the Spanish, they will accept a French commission, and if French and so forbidden, an English commission. And if there is no commission to be had, they will make pretence of one and attack the Spanish anyway. They are naturally armed as are the English buccaneers and French flibustiers, both of whom are in their number: with flintlock musket (usually a fusil boucanier), cartouche box of thirty cartridges, a pistol or two, and a cutlass.

Logwood Cutters: Logwood cutters were rough men who labored for months at a time standing knee-deep in water while they chopped down logwood trees, a valuable dyewood. Many logwood cutters drifted through a variety of trades, including buccaneering, "fishing" for silver (treasure hunting), and even local whaling, leaving them with a variety of skills that made them useful to a various military and quasi-military and naval expeditions.