Mantic Games
Product SKU
MGHB104
In Hellboy: The Dice Game, you take on the role of a B.P.R.D. recruit exploring a mysterious location. As a new recruit your abilities and resources are limited so you'll need... Read More
£20.00
In stock
Notify me when the price drops
Skip to the end of the images gallery
Skip to the beginning of the images gallery 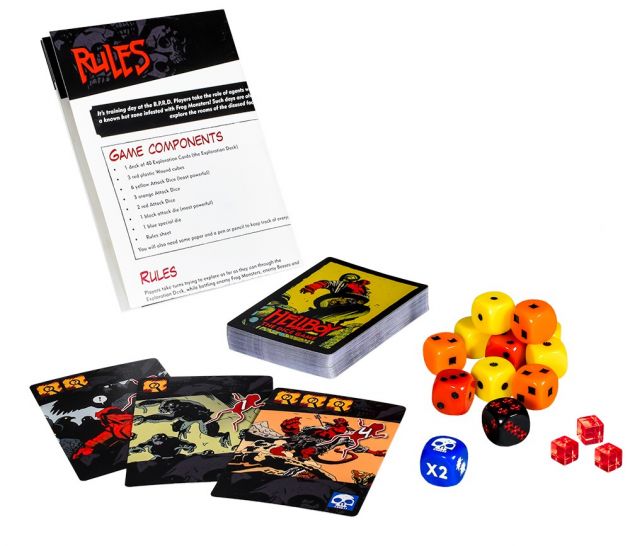 In Hellboy: The Dice Game, you take on the role of a B.P.R.D. recruit exploring a mysterious location. As a new recruit your abilities and resources are limited so you'll need your wits about you to try and survive. Push your luck to press deeper into the unknown or play it safe and live to fight another day. The choice is yours!

The game consists of a deck of cards representing rooms that contain monsters, clues, and encounters, and a set of dice (the same kind of dice that are used in Hellboy: The Board Game).

Players take turns trying to get through rooms and gather clues before getting knocked out.

On your turn, you start with all of the dice and draw a card. You choose which dice to roll (3 max) in order to overcome challenges (like monsters or hazards) and gain clues (victory points). Once you use a die, it can't be used again to overcome future rooms this turn. After defeating a room, you can either choose to pass, and keep all of the clues you've gained, or draw again. If you're defeated by the room, you lose all of the clues you've gained this turn and play passes to the next player.

The first player that gains at least 15 clues triggers the end of the game. Other players get one more turn to try to gather more clues. Player with the most clues wins.