The Battle of Midway Starter Set

Warlord Games
Product SKU
WGBB-771510003
The evolving nature of naval warfare gave more and more prominence to the carrier, and the control of island airfields were of paramount concern to the greater strategic concerns... Read More
£59.00
In stock
Notify me when the price drops
Skip to the end of the images gallery
Skip to the beginning of the images gallery 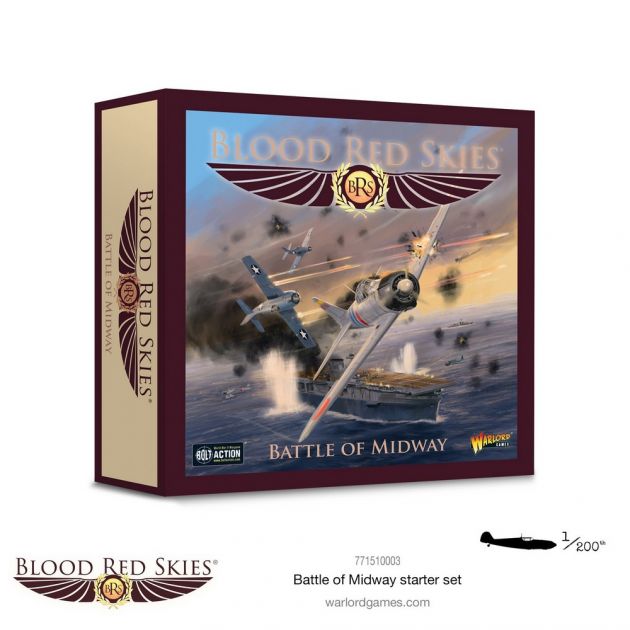 The evolving nature of naval warfare gave more and more prominence to the carrier, and the control of island airfields were of paramount concern to the greater strategic concerns of the Pacific theatre. The air war over the Pacific, therefore, provides a fascinating focus for the tabletop gamer, and there was no battle more crucial than Midway, on which our brand-new Blood Red Skies Starter Set centers.

Blood Red Skies is a tabletop miniatures game in which you take command of a force of fighter aircraft in battle. The emphasis in Blood Red Skies is on controlling a large number of planes at once. Action in the game is fast-paced, with no pre-plotting or book-keeping required. A smallish game of Blood Red Skies, with six planes per side, can be fought in forty-five minutes or less.

A force is comprised of iconic World War 2 fighter aircraft using the dynamic ‘Advantage’ system. Opposing pilots can also use card-based aircraft traits, doctrines, Ace skills and theatre rules to make the most of their planes and fighting environment.

The Battle of Midway starter set contains everything you need to get playing, including rules, tokens, dice, game cards, and crucially 12 highly detailed Warlord Resin aircraft with which to battle.

The Grumman F4F Wildcat When the US Navy and Marine Corps entered the Second World War, they had only one effective fighter aircraft available to them: the F4F Wildcat. Fortunately, the Wildcat proved more than equal to the task of holding the line.

The Mitsubishi A6M2 ‘Zero’ The Mitsubishi A6M Zero was a fast, modern fighter, but had no armour for the pilot. When the Zero (derived from the Japanese name Reisen - meaning Zero Fighter) was in the hands of aggressive and well-trained pilots this weakness was rarely apparent.

The US aircraft are provided in blue-coloured resin and the Japanese in white/cream, making your squadrons easily distinguishable and able to launch into furious tabletop dogfights even before you touch paint to model.