Warlord Games
Product SKU
WGA-501010005
The action intensifies in Beyond the Gates of Antares as a long-forgotten threat re-emerges. The Dronescourge Returns - Gates of Antares supplement - Introduces a new range of... Read More
£22.00
In stock
Notify me when the price drops
Skip to the end of the images gallery
Skip to the beginning of the images gallery 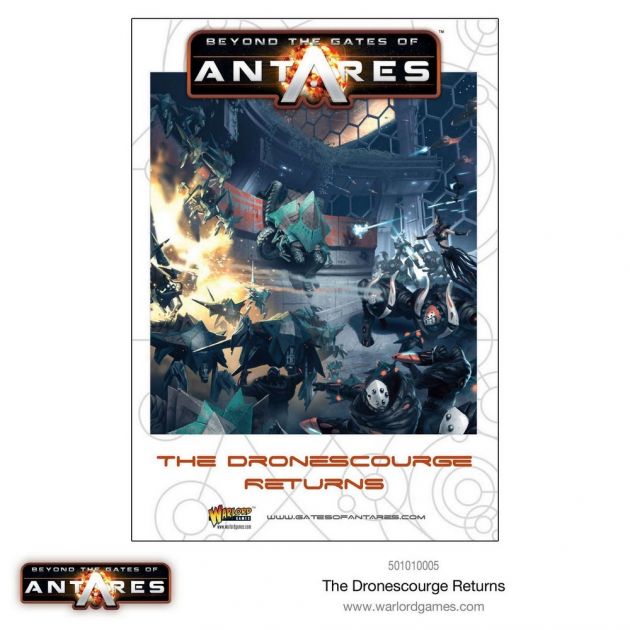 The action intensifies in Beyond the Gates of Antares as a long-forgotten threat re-emerges. The Dronescourge Returns - Gates of Antares supplement - Introduces a new range of exquisite Sci-Fi models with an utterly alien and unique look, new units such as Privateers, plus new equipment and rules for all existing races...

The IMTels of both the Isorian Senatex and Panhuman Concord are deeply alarmed. Along the Northern Interface border between the two great Antarean nations, whole star systems are dead or dying, their inhabitants and nanospore wiped up by... what? A resurgence of the Chryseis shard? Ruptions in the Nexus caused by the events of the Xilos collapse?

Both nations send their top local operatives to investigate: for the Isorians, it is wily Drone Commander Xan Tu; for the Concord, the NuHu Intelligence Mandarin Jai Galeyous. The source of the devastation appears to be the wreck of a vast, ancient starliner in the newly-emerged system of Taskarr. Their investigations are compromised by the presence of a fleet of Privateers and an army of exiled Ghar living on the ship, but what they discover is worse than they could have imagined, the resurgence of a deadly, ancient threat, one thought long-since destroyed - the Virai Dronescourge.

The Dronescourge Returns is a complete campaign supplement for the Beyond the Gates of Antares game. Focusing on forces from the PanHuman Concord and Isorian Senatex, it also includes the new forces of the Ghar Exiles and the Freeborn/Boromite Privateers. The campaign can also be played with any forces or combination of forces that the participants wish to use.

Included in this supplement are: