Mantic Entertainment
Product SKU
MGSS101
The Galactic Co-Prosperity Sphere is the most technologically advanced civilisation in the history of mankind. When a powerful corporation starts stealing secrets, a team of the... Read More
£60.00
Out of stock
Notify me when the price drops
Notify me when this product is in stock
Skip to the end of the images gallery
Skip to the beginning of the images gallery 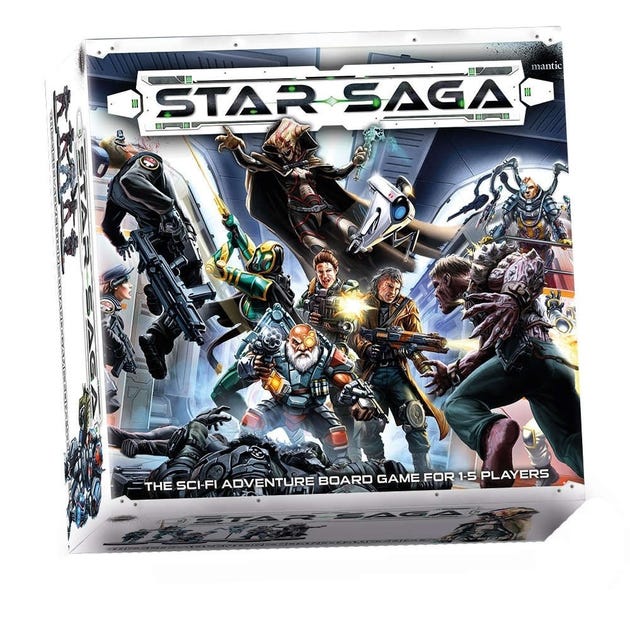 The Galactic Co-Prosperity Sphere is the most technologically advanced civilisation in the history of mankind. When a powerful corporation starts stealing secrets, a team of the galaxy's deadliest mercenaries is hired to retrieve them. Their target: a network of laboratories hidden deep beneath the surface of the planet Eiras. The reward is high, but so is the risk! If the elite guards weren't enough, our heroes will also have to deal with the monstrous creations of Eiras's twisted master...

Welcome to Star Saga, a game of high adventure in a futuristic world of space travel, advanced technology, and myriad alien races. Choose your character and take to the table-top to defeat evil scientists, merciless Marines, and devious puzzles. As the story takes unexpected twists and turns you'll be forced to make difficult decisions to stay alive.

The game allows for up to five players, pitting the intrepid Mercenaries against the scheming Nexus player. The game can also be played co-operatively or even solo. Play a single game in just 30 minutes, or combine the immersive scenarios with innovative new campaign rules for hours of gameplay.

This box contains everything you need to get right into the action, including fully-assembled, highly-detailed coloured plastic miniatures, beautifully designed floor tiles, learn-as-you-play rules, dice, tokens, and all the scenery you need to bring your board to life!

When the fate of the universe hangs in the balance, which part will you play in the epic Star Saga?