Warcradle Studios
Product SKU
DWA220007
Named after the Alliance victory against the Imperium in 1859, the Magenta class is the pride of Napoleon’s levant fleet. These powerful battlecruisers are capable of hovering... Read More
£45.00
In stock
Notify me when the price drops
Skip to the end of the images gallery
Skip to the beginning of the images gallery 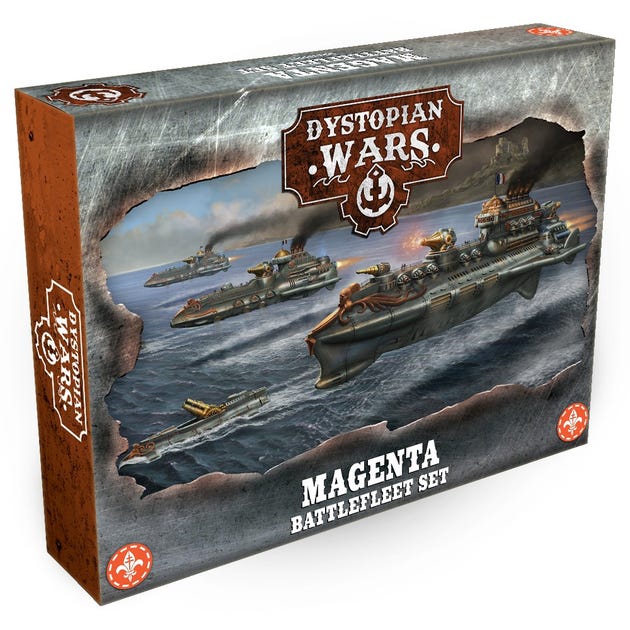 Named after the Alliance victory against the Imperium in 1859, the Magenta class is the pride of Napoleon’s levant fleet. These powerful battlecruisers are capable of hovering a hundred meters or more above the sea bringing their powerful heat lances or other weapons to bear.

The Saint-Michel Levant Assault Carrier is often the centrepiece of a Levant focussed battlefleet. Flight crews of the fighter craft that launch from Saint-Michel are often known as ‘Anges de la Mort’ as a matter of pride. The agility of the skimming Levant Carrier allows it to surge to great heights then descend upon the enemy as scores of ‘angels’ unleash the wrath of President Louis-Napoleon.

The mainstay of the Levant style of ships is the Chasseur Levant Strike Cruiser. Their ability to soar above their enemies if need be makes them hard to precinct as does their various ways of being outfitted. Gun batteries, heat lances or force multiplying generators; even seeing a Chasseur on the horizon makes no guarantee what you might actually be facing in battle.

No captain wants to see an enemy craft soaring above them but the Furieux Levant Grand Corvette make ones blood freeze in terror. That could be the last time the crew feels cold as the Furieux releases deadly thermal cluster bombs. Even the bravest crews know to be rightfully scared if they spot a Furieux rising into the air ahead of them.

As fighter pilots rise in the ranks they may be promoted to become flight crew on a Voliere Levant Support Carrier. The launch catapults put greater strain on pilots and landing on a Levant that could be at almost any height takes incredible skill. Despite this, pilots elevated to this level are often competing with each other to gain more confirmed kills so they can be promoted once again to become the Angels of Death aboard a Saint-Michel Assault Carrier.

Part of Napoleon’s modernisation of the French navy, the Sirene is a powerful attack vessel able to close undetected until it surfaces with its deadly heat Lancette in range to do maximum damage to the enemy.

The tactical counterpart to the Sirene class, the Epaulard uses its secretive deployment to surface at a distance and employ its magnetic bombard to deadly effect