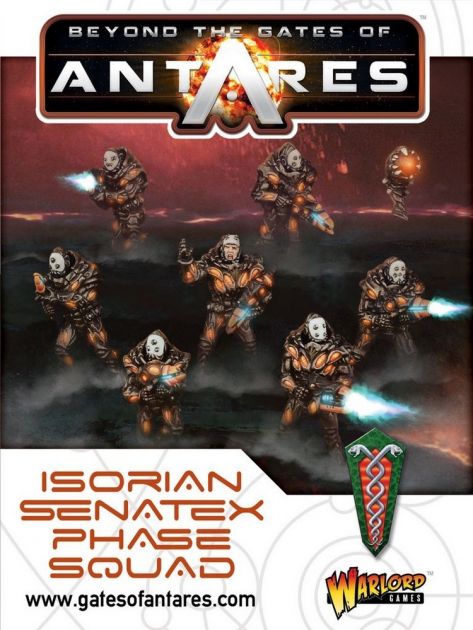 Phase Squads make up the fighting core of the Isorian Senatex’s armed forces. Phase Troopers are amongst the best armed and equipped fighters to be found anywhere and are a match for the forces of the Concord Combined Command. They carry multi-function plasma carbines as standard, whilst a single squad member often carries a formidable plasma lance.

Phase troopers are protected by phase armour, which is unique to the Senatex and derived from alien technology. Phase armour combines hyper-light protection and phase-shifting capability that enables the wearer to momentarily ‘phase out’ of space-time and avoid danger. Phase squads commonly include buddy drones and spotter drones. These small drones act as the remote ‘eyes and ears’ of the squad and feed targeting information into its combat shard, increasing its combat effectiveness.

Please Note: Miniatures supplied come unpainted and some assembly may be required.

In the Seventh Age of humankind the ancient Gates of Antares link or isolate worlds across countless galaxies. The evolved panhuman races wage unending war to control the technology of the Gates and the undiscovered systems beyond.

During the long period of isolation that followed the collapse of the Sixth Age many human settlements failed altogether. Advanced civilisations declined to barbarism. Only in a very few places was the light of knowledge carried onwards. One such place was Isori, with its long history of technical expertise and the unique resources of the Isorian system behind it. Applying their vast technical skills the Isorians began to improve space drives and discovered ways to increase the endurance of spacecraft and their crews. The flexible nature of space-fabric had long been understood, and the Isorians used this knowledge to build ships capable of reaching near-light speeds previously thought impossible. The Isorians sent out explorer probes to the surrounding solar systems - and in doing so, they stirred an enemy - triggering the outbreak of the century’s long struggle between the Isori Senatex and the strange alien race of Tsan Kiri, a silicon-based life form and now centuries of war have waged between them.