Warlord Games
Product SKU
WGA-502215001
In the Seventh Age of humankind the ancient Gates of Antares link to isolate worlds across countless galaxies. The evolved panhuman races wage unending war to control the technology... Read More
£28.00
In stock
Notify me when the price drops
Skip to the end of the images gallery
Skip to the beginning of the images gallery 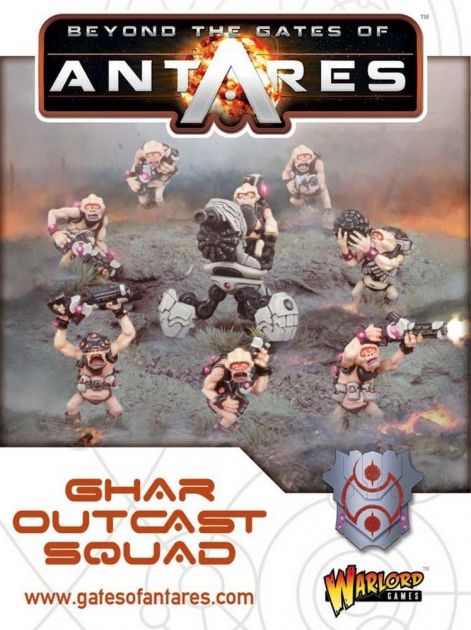 In the Seventh Age of humankind the ancient Gates of Antares link to isolate worlds across countless galaxies. The evolved panhuman races wage unending war to control the technology and the undiscovered systems beyond. These human societies are bound in a bitter struggle for control of inter-dimensional gateways between worlds and it is a war fought across a million planets and in the depths of space, it is a war that has raged for thousands of years.

Ghar are as pitiless in their dealings with each other as they are with their enemies. Those who fail in the eyes of their masters become Outcasts – stripped of their warrior status, their lives to be expended in the service of the Ghar Supreme Commander. In battle Outcasts are driven before the advancing Ghar forces to discover enemies lurking behind cover, or sent to occupy forward positions where they can act as an expendable alarm system against attack. Ghar warriors despise Outcasts almost as much as they despise mere humans, and even Outcasts despise each other – for the Ghar are an unforgiving race with no tolerance of failure!

Outcasts squads are armed with primitive Lugger guns and a limited amount of ammunition – they are not expected to survive for long. To give the squad extra firepower, and therefore extend its usefulness a little longer, it is issued with a disruptor cannon which shoots small distruptor bombs. These are deadly to the enemy, almost as dangerous to the weapon’s crew, and none-too-friendly to the fabric of space and time either.

Please Note: Miniatures supplied unpainted and some assembly will be required.