Five Leagues From The Borderlands

Modiphius Entertainment
Product SKU
MUH095V001
The last tomb was crawling with Grave Walkers.The Tower held a fey sorcerer; we lost Tring there, blasted by eldritch fire; Artum fell as we ran from the trolls of the deep woods,... Read More
£35.00
In stock
Notify me when the price drops
Skip to the end of the images gallery
Skip to the beginning of the images gallery 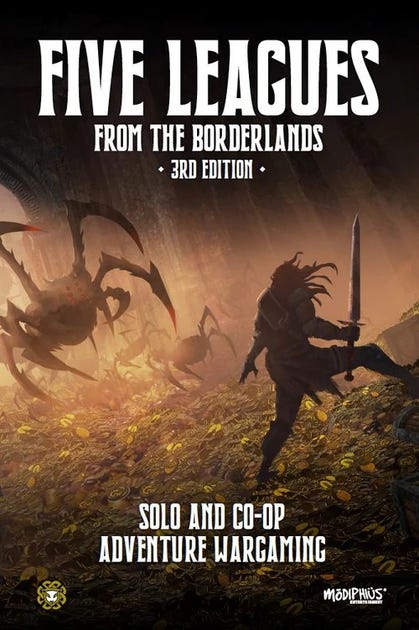 Five Leagues From The Borderlands Information

The last tomb was crawling with Grave Walkers.
The Tower held a fey sorcerer; we lost Tring there, blasted by eldritch fire; Artum fell as we ran from the trolls of the deep woods, but for now, the village is safe. Tonight we'll restock the gear and recruit any travellers from the inn who fancy a share of the coin. Tomorrow we'll take the woods, then bring down that cursed tower for good. Maybe then we can rest, but there are already worrying rumours from the next valley...

Five Leagues From the Borderlands is a solo adventure wargame where you take the role of a warband of heroes and adventurers and explore a grim fantasy world full of monsters, enemies, creeping malice and exciting quests.

The whole campaign is generated procedurally with each battle created from over 100 different enemy types, 17 unique foes and 6 scenario types that can play out in a wide number of ways. As you play, you will explore the game world, discover new locations and take on quests and jobs. Your Warband will gain in experience and power and find wondrous loot... or die gruesomely in brutal combat.

The game is playable with any miniatures you may own and can be played on a 2x2 foot or 3x3 foot gaming table, making it ideal for players who are just getting started on fantasy gaming or for whom this is their first miniatures game. All you need is 6 figures for your heroes and a handful of suitable enemies to fight.