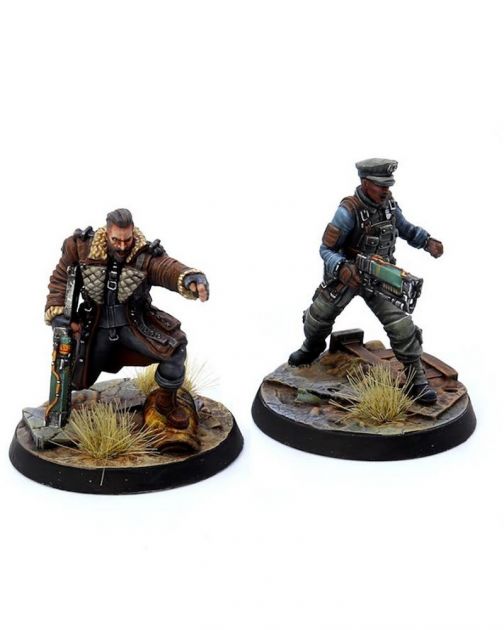 "The Brotherhood of Steel are an elite fighting force, and their high command are the best of the best. Whether wastelanders agree with Brotherhood and its aims or not, few would wish to put either Captain Kells or their leader Elder Maxon to the test on the battlefield. Wielding high tech weaponry and heavy armour on top of their incredible skill, these two heroes of the Brotherhood".

Maxon is a true blue Brotherhood member. Since an early age he lived and breathed the Brotherhood, himself a direct descendant of Roger Maxon, the faction's founder. He was the youngest person ever to be elevated to the rank of Elder, and uses a mix of hardline and more lenient brotherhood ideologies to direct the east coast faction as an effective fighting force. His command is so effective he rarely has to enter the fray himself, having proved himself in combat many times over before. If the situation is dire he dons his power armour and takes to the battlelines, leading from the front with his custom-tuned Final Judgement, dealing massive amounts of energy damage to any who dare oppose the clear and righteous will of the Brotherhood of Steel.

Lancer Captain Kells captains the Prydwen, the Brotherhood's armoured airship. Ready to fight off all comers to the Brotherhood's mobile base, he is fiercely protective of his brothers and sisters, and will dispatch rank and file members to target threats and eliminate them with extreme prejudice and massed laser rifle fire.