Privateer Press
Product SKU
PIP41140
Caine's Hellslingers has developed a reputation as one of the toughest and deadliest outfits in western Immoren. Comprised of former Black 13th gun mages Lieutenant Darsey Ryan... Read More
£27.75
In stock
Notify me when the price drops
Skip to the end of the images gallery
Skip to the beginning of the images gallery 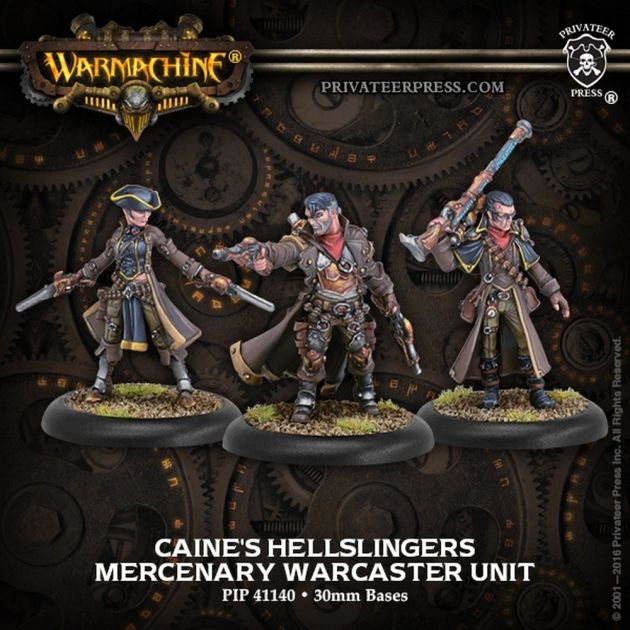 Caine's Hellslingers has developed a reputation as one of the toughest and deadliest outfits in western Immoren. Comprised of former Black 13th gun mages Lieutenant Darsey Ryan and Sergeant Samuel Watts as well as the renegade warcaster Allister Caine himself, this trio has gunned down scores of opponents. Their intelligence, expertise, and lethality make them a force to be reckoned with.

This is the newest incarnation of the Cygnar gun mage Allister Caine, who now leads the remnants of the Black 13th Strike Force gun mage unit following the events of the Skull Island expedition's novel Mark of Caine.

Caine is back and ready to take up the fight once more leading the remaining two members of the famed Black 13th. Though he now battles to further his own agenda, Caine's Hellslingers boast the Partisan (Cygnar) ability, which allows them to bring their formidable skills to both Mercenary and Cygnar armies. The Hellslingers bring death and destruction to their enemies in a whirlwind of magelock fire. Thanks to Caine's new attack type, Witch Mark, enemies hit by his pistols become easy prey for his spells, such as Calamity.

Please note: Miniatures come unpainted and some assembly may be required.

Please note: As of April 2017 Privateer Press are no longer including stat cards in any of the miniatures from their Warmachine and Hordes ranges. The cards can be purchased separately in the faction Decks. Wayland Games are not able to supply any Privateer Press stat cards separately.