Warlord Games
SKU
WGBP-315114016
Ulysses S. Grant: Ulysses Simpson Grant, or more accurately Hiram Ulysses Grant (he was registered incorrectly at West Point) was a total failure. He failed in several business... Read More
£5.62
In stock
Notify me when the price drops
Skip to the end of the images gallery
Skip to the beginning of the images gallery 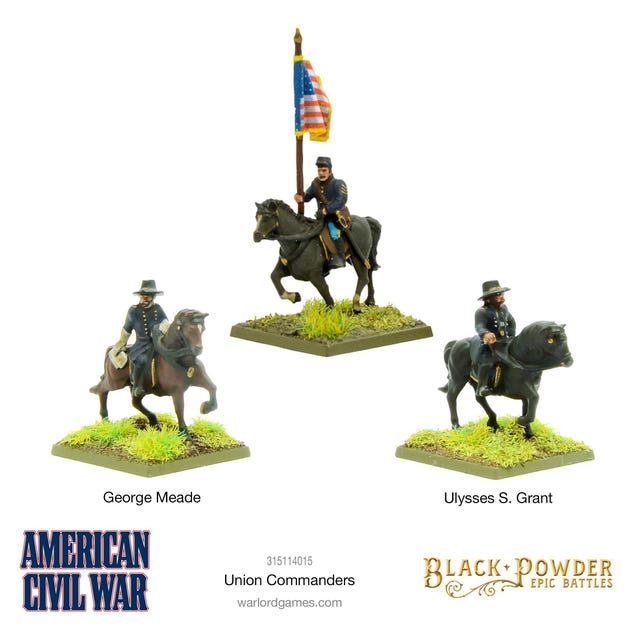 Ulysses S. Grant: Ulysses Simpson Grant, or more accurately Hiram Ulysses Grant (he was registered incorrectly at West Point) was a total failure. He failed in several business ventures; when president his administration was rocked by scandals; he lost most of his wealth after the war in further failed ventures and only gained back some funds by publishing his memoirs. Grant – the failure. However, there was one enterprise at which Grant excelled – War!

Grant had served in the Mexican War but then left the army to pursue a career in business. When war came in 1861 he promptly rejoined offering his services to the cause of Union. Initially serving as a brigade commander in 1862 he was promoted to major general and secured Kentucky and most of Tennessee for the Union. At Shiloh in 1862 he was surprised by Johnston’s Confederates but, completely unfazed by the initial setbacks, launched a counter-attack and won the battle. In July 1863 Grant outmanoeuvred and defeated the Confederate forces defending Vicksburg and captured the city in July, in effect splitting the Confederacy, the navy already having secured passage of the Mississippi river. Grant was not present at Chickamauga, but was in command at the victory of Chattanooga/Missionary Ridge. In light of his successes Grant was promoted to Lieutenant General and commander of all of the Union armies. Grant then came East to oversee the campaign against Lee and the Army of Northern Virginia. Although Meade remained in command of the Army of the Potomac Grant went along with it, effectively using Meade’s own headquarters and staff as a post office for issuing his own orders. The battles against Lee in 1864 have gone down in history as some of the most savage of the war. Grant was often held by Lee but, again unfazed, he refused to acknowledge defeat and simply shifted his entire army “to the left”, forcing Lee to follow him to the next bloody encounter. Eventually Grant trapped Lee in a siege at Petersburg, a campaign of attrition then ensued.

Whilst sat outside Petersburg Grant oversaw other operations against the Confederacy, most notably those conducted by Sherman and Sheridan. In April ’65 Grant finally broke through Lee’s defences, captured Petersburg and then Richmond – the long sought after prize of the past four years. 68 June 26th 1862 – The Battle of Mechanicsville, Virginia Lee was finally cornered at Appomattox and compelled to surrender what remained of his army to a generous Grant. Denounced by many as a “butcher” for his losses during the battles against Lee Grant is still undoubtedly one of the great commanders of the age.

George Meade: George Gordon Meade is best known for his defeat of Confederate General Robert E. Lee at the Battle of Gettysburg. With a military background honed by experience in the Second Seminole War and the Mexican-American War, Meade served as a Union General in the American Civil War. From initially commanding a brigade in the Peninsula Campaign and the Seven Days Battles, to meeting great success as a division commander, particularly at the Battle of Fredericksburg, he eventually rose to command the Army of the Potomac.

This command came only three days before the crucial Battle of Gettysburg, and he only arrived in the field after the first day of action on July 1. The Army of the Potomac used favourable ground and positioning to repel a series of large-scale assaults over the next two days. Robert E. Lee's Army of North Virginia, unable to overcome these defences was forced to retreat, ending his hope of invading the North. Though hailed as a great victory, it was undermined by the perceived ineffectiveness of Meade's pursuit of the retreat, which prevented Lee's total destruction. In the latter years of the war his influence was overshadowed by that of general-in-chief, Ulysses S. Grant, who accompanied him through the Overland Campaign, the Richmond-Petersburg Campaign and the Appomattox Campaign.

Note that this figure has a brand-new pose and differs from the ACW pre-order exclusive figure.